I expected a routine mission. A rich lord hired me to track down and eliminate a pack of black wolves that ravaged his farmland. At first, the wolves contented themselves with attacking the cattle at night. But they were recently found wandering at the edge of the woods in the late afternoon. The growing anxiety of the villagers forced the lord to contact me. Once there, I easily spotted the traces of the wolves and I set some traps with fragrant baits. I was certain I could trap the scouts, and that the rest of the pack would be frightened. But no! Nothing! All the traps were triggered in the night, and the bait removed, as if the wolves were playing with me. The next afternoon, an old woman who picked up acorns in the undergrowth was attacked. The wolves shredded her. I had never witnessed such savagery. I could easily follow the traces of fresh blood for several leagues. The trail led me to the entrance of a cave. As I cautiously entered the narrow winding gallery, I discovered two imposing werewolves, standing on their lower limbs, confronting each other in a pit strewn with bones. The two lycanthropes, too absorbed in their struggle for the bloody head of the old woman, didn’t even notice my presence. I ran away in a hurry, taking care to always have the wind at my back. The night fell, and I finally returned to the village. I must announce this bad news to the lord at tomorrow morning’s scheduled audience. Unfortunately, I can’t deal with these lycanthropes on my own. I need help. 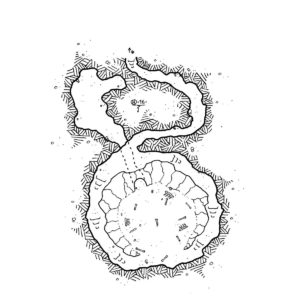