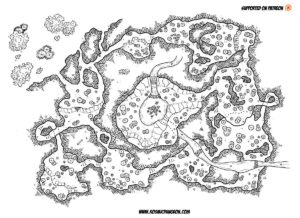 I still remember the exaltation I felt by approaching Mycelia’s grotto. The crystal I had sought for so long — the one I needed to complete my last alchemical experiment — was there, though I still had to find the subterranean cascade the old hermit told me of.
I was immediately intrigued by the large presence of mushrooms. The warmth and dampness of the cave offered the ideal environment for their development, and there was nothing astonishing to their proliferation; yet, their gigantic size was impressive.
I was feeling more and more disoriented by this underground expedition; my senses were exacerbated, and I even began to experience hallucinations. I saw myself fighting some dreadful fungus and other abject creatures, and I quickly realized that these hallucinations were being caused by fungal spores. Reactively, I immediately protected my mouth and nose with a cloth piece. It was, however, too late: I was already intoxicated! I could not say how long it lasted, for I was lost, and I had the impression that I was wandering aimlessly  for hours.
After a while, I gradually regained my sense and, thanks to this burst of lucidity, I opted for what seemed the best solution to me for the time being: to go up the river and reach for the waterfall. However, after only fifty meters the river disappeared under the rock. Tired and the mind still foggy, I tried my luck and held my breath to cross this passage which, I hoped, would probably only be a few meters long. Unfortunately, dragged by the powerful currents, I was violently hurt by a rock and I lost consciousness.
I awoke several kilometers down the river, stranded on the bank, bearing several injuries. Wounded in my pride, I regained my camp painfully. I intend on taking advantage of this forced convalescence to develop an effective protection against spores, before attempting a new exploration Mycelia’s grotto. 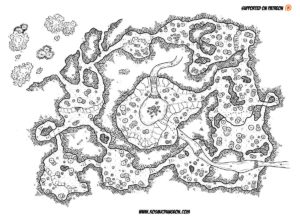