Hello fellow followers. I know it’s been a long time that I haven’t published anything so let’s correct that. Here is the 16th level of my modular cavern project. This small cave, with the hidden stairs, could serve as a connection with my modular dungeon project. Otherwise you can use this little blurb which is perfect to launch a whole new campaign against ratmen.

The cave with the hundred faces.

In memory of man, the inhabitants of the ancient Aldur’s city were anguished at the slightest evocation of the name of the hundred faces’s cave. The main reason for this collective terror is obviously dute to the presence of three strange pillars of natural rock in the center of the cave. Imagine that the mere sight of these columns, engraved with numerous disturbing sculptures, representing vague humanoid forms with misshapen and tortured facies, provokes an intense feeling of nausea. These horrible faces are described as disproportionate and rickety, of incredible ugliness, which instantly freezes the blood of the one who contemplates them, so much these immondises go against the nature’s laws.
And to make matters worse, many rumors say that some would have seen troglodytes enter and leave into the cave. But after all, maybe this is just young people from another village who came to engraved the stone. An oversized obsidian stele that greatly fuels the lust of Aldur’s young men. This enormous block, erected against one of the walls of the cave, was originally blank and perfectly smooth. But it’s now covered with an impressive number of inscriptions, which are sometimes almost illegible as they are extremly tight. According to a local custom every young person in the Aldur’s city who wants to prove his bravery must face the dangers of the cave in order to mark the stone with his name.
But over time, the stele began to crack, and an accident recently occurred. Only one member of the last group to have gone to follow this initiatory quest returned. As soon as he arrived in the village, he painfully managed to explain what he had seen. The crack of the stele had suddenly been aggravated by the hammer blows of his companions, and a thick greenish gas had escaped at once. The survivor said he saw his two acolytes collapse on the ground. He had great difficulty in distinguishing their inert bodies inside the ever-growing gas’ cloud. It was then that he panicked and fled for help.
As none of the villagers had enough courage to go and get their remains, the bodies of the unfortunate are still lying there, on a black and damp ground, half devoured by vermin and maggots.
Of course, the villagers dont know that an access to Tyasbas, the mysterious city of the ratmen, is hidden just behind this block of obsidian. 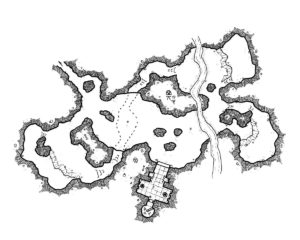