Let’s go, I’ll try to catch up a bit my late in publication with an extra level for the modular cavern. This drawing dates from last year! I still have a dozen maps that drag in a pocket and that aren’t even scanned yet.

This cave has been enjoying a great activity since the governor of the city took drastic measures to stem the smuggling of adulterated alcohol. The guard has been reinforced by a large number of new recruits, the gates of the ancient city are now closed and a systematic control of all the trolleys wishing to enter or leave is carried out.

In order to thwart the surveillance of the guards, a group of bandits undertook to dig a narrow gut in the rock from the sewers of the city to join the natural cave network. The small group of bandits is now at the head of a thief guild composed mainly of thugs. In order to regulate the comings and goings, and especially to secure the transport of goods, a group of strong warriors are present permanently to perform rounds. They set up every night a small makeshift encampment inside the cave. They built a suspension bridge and ladders for facilitating their movements.

It has been some time since smugglers all kinds use this cave to transport their dubious goods without arousing suspicion. The governor is totally distraught by the situation and doesn’t know what to do. Despite all that he undertakes to fight against this scourge, this effort remains vain and alcohol continues to flow! 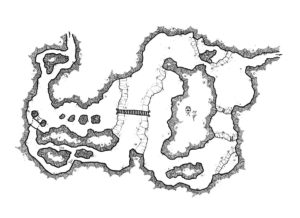