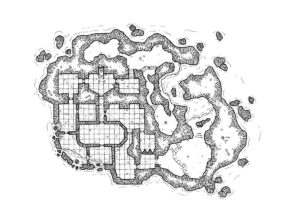 I had a bad feeling about this mission. The first archbishop of the Conservative Order asked me to investigate the disturbing disappearance of part of the archives of the great library. All documents concerning the Abbey of Saint Aurelius have mysteriously been reduced to ashes. The monks of the Abbey secretly protect a dangerous relic, the tourmaline of Nazgaroth. A precious stone that contains the energy of a powerful demon. The first archbishop fears that the stone has fallen into the wrong hands and has been used to resurrect one of the most dangerous creatures the world has ever known. I have to get answers and bring back this relic. As I sailed around the island, I could see that the abbey was in ruins. What had caused such damage in such an isolated area? I was able to access the foundations through a cave. A powerful evil energy permeated the place. I walked cautiously through the corridors, towards the hidden relic, when I saw three specters arise. By the grace of Boldor, God of Light, I was able to vanquish some of them, but I had to flee empty handed to avoid being overrun… I have to recruit fellow soldiers to come back and clean the place to accomplish my mission.