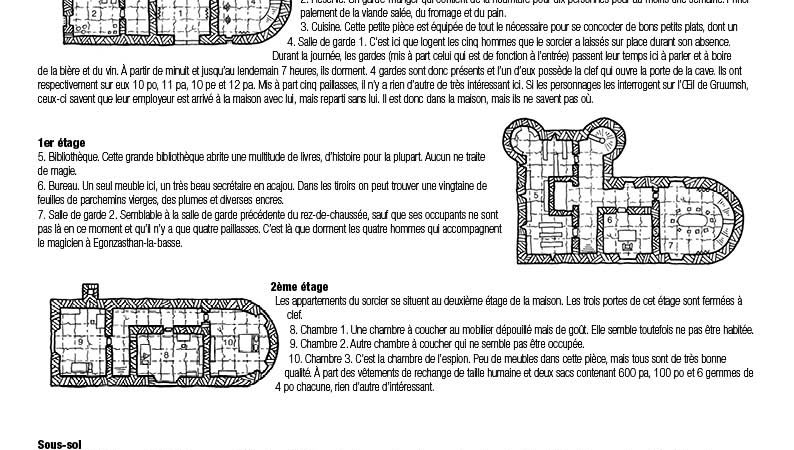 Hi everyone, here’s another one dungeon page from a collaboration with the webmaster of the site AideDD, the scenario version dedicated to 5th DnD is available on its website.

A big thanks to Mark Tygart for provided us a translation of this one page dungeon.

The Eye of Gruumsh
The characters are in search of a relic of Gruumsh god they must submit to a shaman orc tribe in exchange for the antidote to save one of their own. The mark of the witch who stole the Gruumsh Eye is located in a remote to a little less than three hours walk south of a large city. Luckily for the characters, the owner is away and took with him four of his best men, but five others remained in its mark.
The house is protected by a wall of 3 meters high. The entrance is closed by an iron gate, near which was built a small hut. A hundred meters separates the gate of the house. Another building, which appears to be a stable, stands by the road that connects the entrance to the house.
Inside the house resides permanently a guard, relayed regularly every evening and every morning, and accompanied by two hounds. The cabin contains a bed, a table, a stove and a rope pressing a bell on the roof. The man in his pockets 17 Pa. Even at night, the guard is awake.
As regards the stable, it contains five boxes. But, as stated earlier, the sorcerer left with four of his men. The boxes are empty; so there is no horse, but hay and a pitchfork. 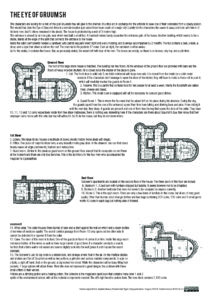 5 thoughts on “One Page Dungeon – The Eye of Gruumsh”