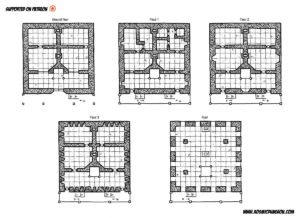 I enjoyed a short break in the shade of the water collectors installed on the roof of the fortified tower when the alarm sounds. I jump to my feet to join my archer’s post, and at quick glance I saw an enormous cloud of dust. The dinosaur horde was finally at the gates of the city. I use the scaffolding to  go down and post myself behind an arrow slit.A real rain of arrows fell on the carnivores, but it wasn’t enough to stop them. The lancers postitioned at the foot of the ramparts succeeded in containing them for a moment, but the arrival of the mastodon changed the situation. The tower staggered several times under the blows carried by his massive skull. The captain frightened by the collapse of the building ordered the evacuation. I felt a powerful jolt as I went to the scaffolding, the tower flickered and the wooden walkways broke apart. I saw some of my comrades get impaled on the broken beams.

Without losing a moment, I turned and jumped into the access hole. Fortunately, I managed to cling to a string. As soon as I had time to go out, the building collapsed into a great noise. The dinosaurs rushed into the breach thus created, and the carnage reigned in the streets of Leoxam. I survived by hiding in a nearby dwelling.

Once the calm returned, I went out of my hole, and I realized that I had been very lucky by seeing the extent of the damage. The dinosaurs had crossed the city from side to side leaving behind them the jagged body pieces of the poor villagers who hadn’t been able to find a refuge.