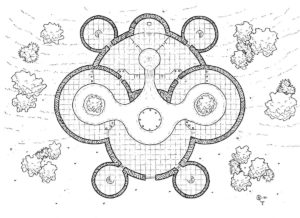 The construction of the temple dates back to the creation of Thosgilal’s City, the capital of the Elven kingdom.
For a very long time, the majestic city resisted numerous wars against the other great Races of the Old World. The city of Thosgilal showed all the power and the beauty of the Elven people, and its temple is no exception.
It’s built entirely in smooth white stones, and is composed of four domes and four high, spindly towers, adorned with fine and graceful sculptures.
The main dome forms the entrance. Inside is a large, round pool with a large stage in its middle for ritual dances. The water flows on each side into the secondary pools which quenches the thirst of two centenary magical oaks. At the top of each dome, a large canopy filters the sunbeams, bringing clarity and warmth. At the back of the temple, in the prayer hall, a mysterious groundwater source comes from the depths of a bottomless pit and supplies the pools. According to the legend, the water possesses some magical features, granting strength and youth to the priests who drink it. The altar is, in fact, a magically locked chest containing Saldezar’s sword.
Saldezar was a powerful elf druid who succumbed to the dark side of the magic. Stories tell that the Elven nation succeeded to ally all the Races of the Old World to defeat this evil being.
The great magician elves enchanted a sword to steal Saldezar’s vital strength and they trapped him.
They spread a rumor about Daxon, the most dangerous warrior in the Old World. A gnome with an extremely powerful magical sword. Of course, his lust for power led Saldezar to take over this blade, and his life force was immediately drained. Thus the elves magician managed to banish him to another dimensional plane.
Since that day, peace reigns in every valley, but Saldezar works hard to escape his dimensional prison. Some of his faithful shapeshifter daemons have infiltrated the temple and are already looking for the sword of their master.