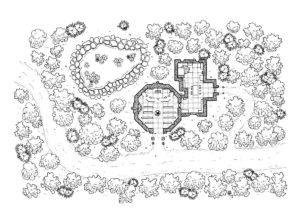 Hy guys! You’ve choose to see a temple trough the poll on kosmicdungeon.com so I drew a small roadside oratorie.
Thanks you all for your participation and let’s see what you want to see next. For remember you can acces at the poll by the website home page or here.

The polyphonic songs of the White Lotus’ priests resounded for many years in the oratories scattered throughout the empire of Oricphon. The cult’s members worship Denzylan the aquatic nymph and proclaim that she is the genitor of all life forms present in the Old World. The cult, once so flourishing, has completely fallen into oblivion since the Great War and the arrival of the new religion from the west.
However, the mad dogma still exists in rare places, as here, in the small forest of Peldorin. All travelers wishing to pray Denzylan in order to attract the grace of his favors are welcomed. They are warmly received in this roadside chapel by Gildax, the fat priest who takes care of the places. The latter is concerned about a sinister case but he tries to hide his anxieties under a false joviality.
Gildax spends a lot of time to take care of the sacred pool. The water of this basin, supplied by an underground source, is crystalline and of unparalleled purity.
The cult’s priests cultivated the white lotus for centuries and became masters in the art of making potions, ointments, and decoctions based on this plant with a thousand virtues.
All adventurers can acquire a bottle of invigorating ointment in addition to the traditional blessings, by means of a consistent offering.

Gildax will gladly give the reasons for his concerns to the PCs if they succeed in winning his trust.
Gildax was assaulted a few days earlier by a band of outlaws hiding in a nearby cave. Their leader, a Machiavellian wizard, came in good company in the middle of the night to extort the recipe for a paralyzing infusion. The priest tried to resist, but the sorcerer used powerful powers of mental persuasion.
Gildax will then ask the PCs to capture this vile sorcerer and retrieve the precious recipe before it is revealed to other unkind characters.

A big thank to all my awesome supporters who allow me to publish this map for free under a Creative Commons license BY-NC-SA 4.0

If you also want to support my work, join the community on  Patreon and enjoy benefits.