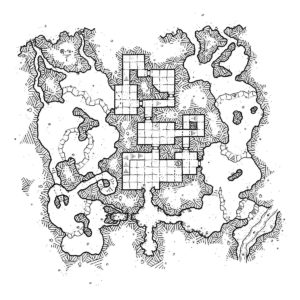 July 18th, year 1200;
I was seated quietly at a table in the village tavern when a messenger rushed in with an urgent call for help: a collapse in the mountain had trapped a small group of men on the construction site extending the tunnels of Ounass’s tower.
Ounass is a powerful sorcerer known for collecting all kinds of ancient magical objects.
I had no trouble getting there. I could see the opulent tower even from the valley. The entrance to the cave was swarming with activity, and I immediately began to help clear away rubble.
After several hours of hard work, we began to find a few dead bodies with gruesome mutilations, as if they had been devoured.
Fear and anguish could be seen upon several faces among the rescuers. Suddenly, one of them shouted, “Here, hurry! This one is still alive!” We quickly removed the unfortunate man from the rubble. He was terrified and his lower limbs were covered with multiple bites.
One of the workers hastened to seek Ounass the Flamboyant. He confided to me his extreme embarrassment as to this situation, and fears that the workers would refuse to continue working. Faced with his distress, I had no choice but to agree to help him.
Looking for clues about the origin of the bites on the survivors, I noticed several crevasses barely wider than my arm. A worker confirmed to me that there was a secondary cave network after shouting into a hole and hearing the echoes. We were all exhausted. So I cleverly negotiated supper and accommodation with Ounass.
Tomorrow, we will excavate these last meters of rock and explore the caves in search of these creatures. 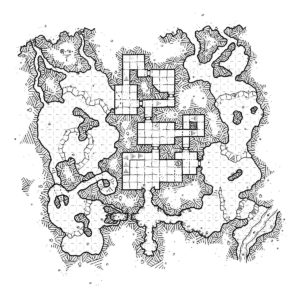 
A big thank to all my awesome patrons who allow me to publish this map for free under a Creative Commons license BY-NC-SA 4.0 … If you also want to support my work, join the community on  Patreon and enjoy an early access as little as 1€ … (1 month before publication on the website, perfect for Dm !!)